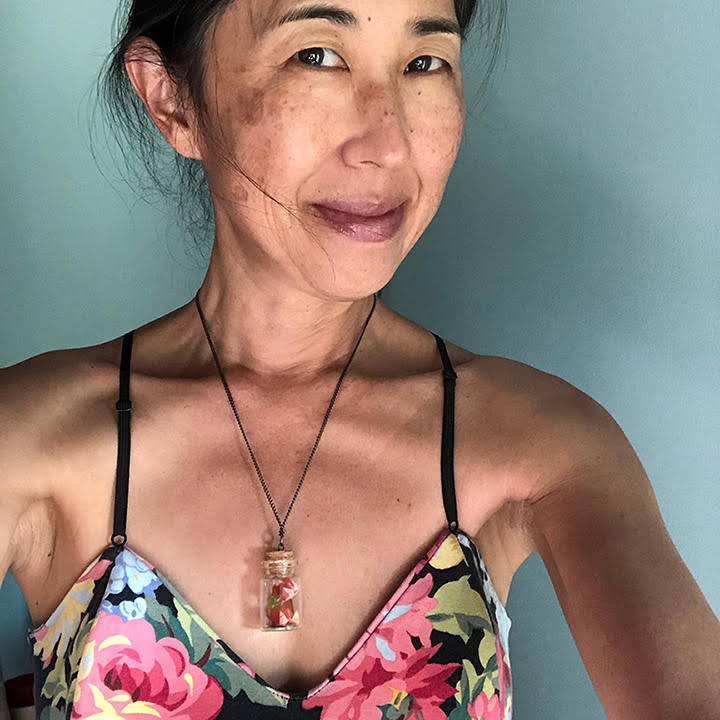 She learned origami as a young child first with her mom from a book her mom had purchased and from her maternal grandma. Her grandma was the person who taught her how to fold the classic paper crane. Though she made them from time to time it would be years before she would discover both her ability and passion for folding miniature models. In her childhood and adolescence, she became a versatile artist in multiple mediums including pencil, pen and ink, oils, and watercolors. She enrolled in a 2-year advertising art program as soon as she graduated from high school. While she loved the curriculum (color & design, volume design, layout, typography, reproduction lettering, art history, etc.) she found the environment too creatively stifling and dropped out over spring break of her second year, less than three months before graduating. After leaving art behind she spent the next 9 years working in retail where she learned sales, customer service, inventory control, visual merchandising, building a personal cliental list, and more. It was 1995 when she had the idea to fold 1000 origami cranes small enough that a mobile of them could fit in a tabletop display case. It became her passion and a hidden hobby. In 1997 she, by chance, discovered she possessed an innate talent (a centuries-old French and Italian jewelry making technique) and became a couture accessory designer creating custom bridal veils, hair accessories, jewelry, and cake toppers for many of the San Francisco Bay Areas most upscale brides. It was fun and creative and became the moment she realized that what college she did complete coupled with her experience in retails sales were a strong foundation to launch her first entrepreneurial venture: http://theflirtybride.com/ While she enjoyed working in the luxury wedding industry 2001 brought with it both the dot.com collapse followed by a strong recession. As she struggled to stay afloat she once again, by chance, stumbled upon another new career. She didn’t have the budget to hire a professional web designer so she taught herself HTML and Adobe Dreamweaver to be able to create a website for her own business. Much to her surprise other people immediately wanted to hire her to design or redesign their websites. Web design and development led to blogging and being hired as a social media consultant by small business owners. When she relocated to West Michigan in 2014 she thought she would carry on with a career in web design and development and social media consulting only to discover the internet speed in the rural area she lives in wouldn’t support uploading images and large files. She took it as a sign the universe wanted her to do something new. In 2014 she introduced her tiny cranes to the visitors that attend ArtPrize, an annual public art competition held in Grand Rapids, MI. With their encouragement and support, she decided to make her miniature creations her full-time occupation. She chose the name “Tinygami” because it translates to tiny+paper. You’ll find her folding 1/2”-1.5” squares of paper in her studio nestled in the woods just outside Greenville. To be a full-time artist Tamaki has found authenticity and versatility are the keys to her success. There are many possible revenue streams as an origami artist that include selling small products (jewelry and decorative items) online, at local consignment stores, and occasional pop-up markets. She is also open to commissions, has been hired as a public speaker, as an entertainer at corporate cocktail parties, as a corporate team building activity, and was approached to co-author an origami book published in 2016. Her next revenue stream is to launch the Tinygami Patreon page where she will offer video tutorials of her creative processes. The Patreon page was something she’d meant to do earlier this year but became sidetracked after receiving a shocking health diagnosis (bilateral, inoperable, thalamic, and midbrain brain tumors) in April. Learning about this condition and taking steps to reverse it has become her top priority. And while she set some sales events aside over the summer she did accomplish her two professional goals she had set for herself this year to display a collection of 12 of her mobiles during the month of June and entered ArtPrize for the fifth year in a row. Having created a strong recovery plan (mind+body+spirit) for her health she is back on track and has continued to move forward both personally and professionally.

Click on this link and Help support this podcast because I love puppies : )